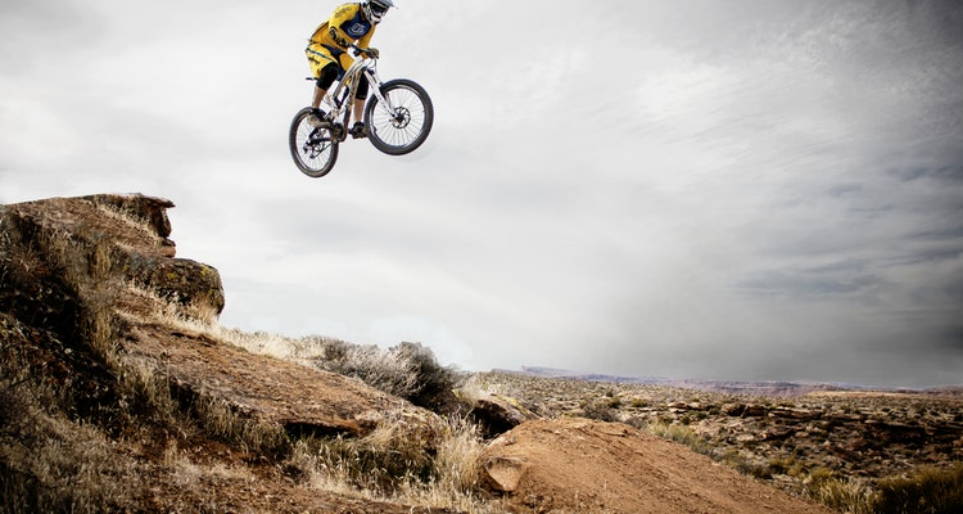 Electric bikes are the future of transport and become more popular every year. You may have realized the benefits of e-bikes already, but there are a few things you need to know before you buy one to ensure you get the right one for you.

Before you buy an electric bike, you need to know what is legal in your part of the world. There are three different classes of electric bikes, which will determine what you are allowed to ride.

Class 1 - You may hear Class 1 electric bikes referred to as pedelec bikes. These bikes assist your pedaling up to a limited top speed of 20mph. They have a maximum motor power of 250W and are often the most affordable electric bikes.

You can get Class 1 electric mountain bikes, permitted on some mountain bike trails. Check if your local trails allow ebikes before heading to them to avoid disappointment.

Class 2 - The only difference between Class 1 and Class 2 electric bikes is that Class 2 bikes can be ridden without pedaling. These bikes are fitted with a throttle so that you can ride them like a moped.

Class 3 - Class 3 electric bikes work the same way as Class 1 bikes. However, some have a throttle, and their limited assisted top speed is 28mph.

These electric bikes have more powerful motors, so they make climbing hills more manageable and can carry more weight. However, they are not always permitted on mountain bike trails.

There are four electric bike classes in the European Union. But some of the vehicles covered by them can be regarded as something other than electric bikes.

L1e-A - This class is reserved for electric bikes with less than 1,000W and have a top speed of 25kph. They are known as power cycles and can have two, three, or four wheels. These vehicles can have pedal assist and throttle.

L1e-B - Bikes in this class have 2 wheels and have to be under 4,000W. Their top speed can be no higher than 45kph, and these are referred to as mopeds. But they have to be pedal assist only.

L2e - This class is the same as L1e-B, but these vehicles have three wheels called three-wheeled mopeds.

L6e - Vehicles in this class are known as light quadricycles. They can only have pedal assist, four wheels, and be limited to a top speed of 45kph.

Once you have determined the class of electric bike you can and want to ride, you need to look into the electrical systems of the bike you like the look of.

Electric bikes with powerful motors have more torque for climbing hills and carrying cargo. They also accelerate quicker, which is handy for keeping up with traffic.

But if the motor isn't paired with a high capacity battery, the electric bike's range will be compromised. Working out the range of an electric bike is tricky due to the various elements involved.

For example, how hilly your journey is, your weight, and how you ride it will make a difference in how far the bike will go between charges.

If you choose an electric bike with a larger battery, you should be able to ride further before you need to charge. The capacity of the battery is indicated in Watt-hours (Wh). This number determines how many hours it can endure 1 Watt of power before completely depletes. 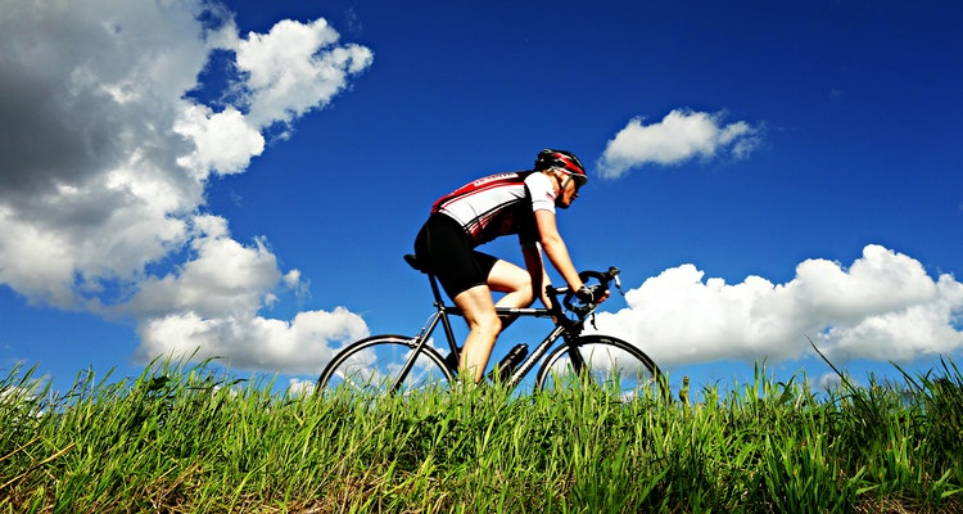 3. What You Want To Use Your Electric Bike For

An electric road bike is great for fitness and commuting in cities but unsuitable for riding rough terrain. A hybrid electric bike is ideal for a mix of paved roads and broken pathways, but it won't be robust enough for mountain bike trails.

You may want to opt for a folding electric bike for the ultimate convenience. These are easy to store and transport and come in various types. For example, you can buy folding city bikes, ideal for commuting, or folding mountain bikes for weekend fun. There are also folding electric bikes that are versatile enough for various uses.Once you have determined the class of electric bike you can and want to ride, you need to look into the electrical systems of the bike you like the look of.

Electric bikes with powerful motors have more torque for climbing hills and carrying cargo. They also accelerate quicker, which is handy for keeping up with traffic.

But if the motor isn't paired with a high capacity battery, the electric bike's range will be compromised. Working out the range of an electric bike is tricky due to the various elements involved.

For example, how hilly your journey is, your weight, and how you ride it will make a difference in how far the bike will go between charges.

If you choose an electric bike with a larger battery, you should be able to ride further before you need to charge. The capacity of the battery is indicated in Watt-hours (Wh). This number determines how many hours it can endure 1 Watt of power before completely depletes.

Some Great Examples Of Electric Bikes

The GOGOBEST GF600 is a potent electric mountain bike. It has a punchy 1,000W rear hub-mounted motor to assist your pedaling up to 40km/h (25mph). 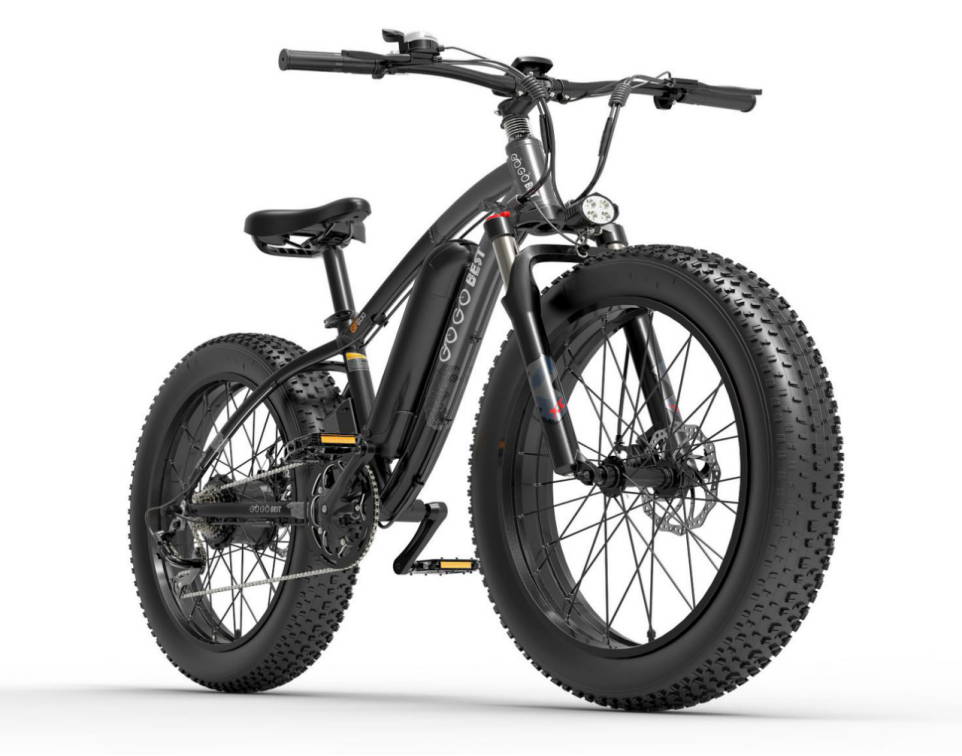 This electric bike has lots of torque to make hill climbs effortless, but the Samsung 18650 lithium battery also gives it a 110km (68-mile) range. Therefore, the GF600 can allow you to access new terrain and explore.

GOGOBEST has equipped the GF600 with26" X4" tires. The extra width of these tires gives you lots of traction on loose surfaces, such as snow, sand, and soft mud. Their high volume helps to smooth out the ride quality and the suspension fork. This means you can ride in comfort while having confidence.

The GOGOBEST GF700 stands out from other electric bikes thanks to its unique features. The most noteworthy characteristic of this electric bike is that it has two motors! 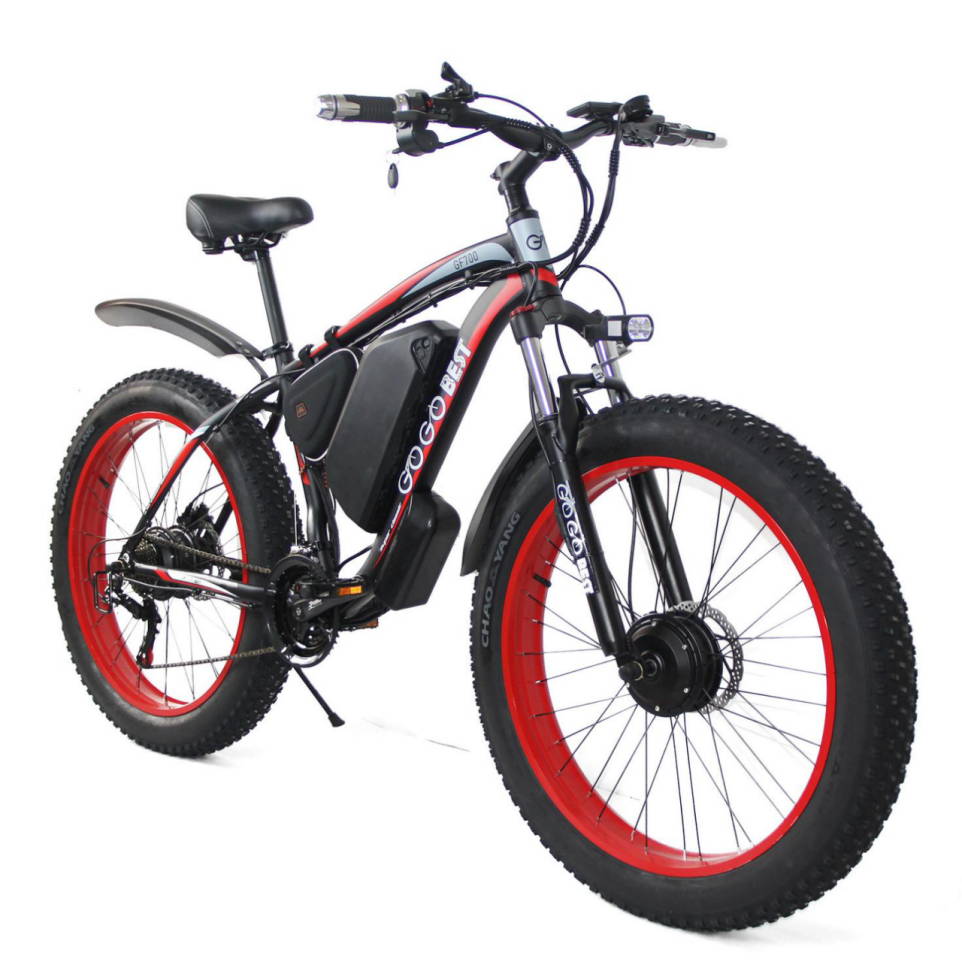 The GF700 has 500W hub-mounted motors on both wheels, giving you almost unrivaled climbing ability. In fact, this bike has been proven to scale 45° slopes with no problem at all.

The other benefit of this motor placement is that the bike is balanced with even weight distribution. Therefore, it handles well and is predictable when taking on technical descents. The powerful hydraulic disc brakes enhance this control.

The large volume and 4" wide tires provide lots of traction, which is extremely important for a bike with so much torque. They allow you to maintain optimum grip when riding over rocks and roots.

The squishy tires combined with the suspension fork also improve the bike's comfort on any terrain.

The GOGOBEST GF300 is an incredibly versatile folding electric bike. It is perfect for commuting and weekend fun due to its excellent collection of features. 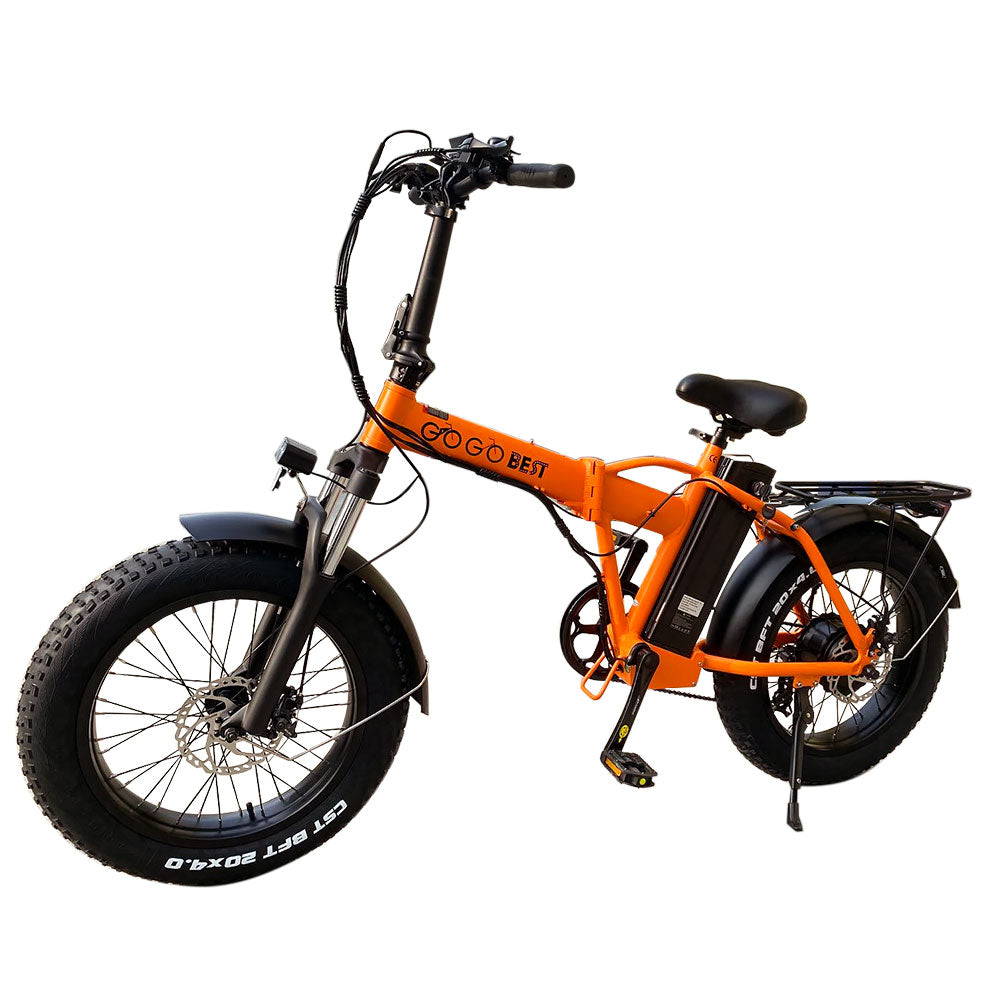 You can fold the bike up into a compact size with several benefits. If you want to use it for commuting, you can carry it onto public transport and then ride the rest to work. You can then fold it up and stash it under your desk or safely.

The compact size also makes the GF300 ideal if you don't have much space at home or want to carry it in your car.

Even though the GOGOBEST GF300 is a compact bike, it still packs a punch. It is fitted with a 1,000W rear hub-mounted motor, powered by a 48V12.5Ah lithium-ion battery. Combined with the excellent Shimano 7-speed drivetrain, you can ride 100km (62-miles) before recharging.

This bike's frame design isn't just about making it compact. The frame is made from aerospace 6061 aluminum alloy, which is strong, stiff, and light.

The frame's stiffness makes the bike responsive and helps to dampen vibrations from the road. The vibration damping is also enhanced by the dual oil spring suspension and high-volume tires.

GOGOBEST has fitted the GF300 with powerful disc brakes and bright LED lights for safety.

The GOGOBEST GF300 is an excellent electric city bike for days out. The bike's versatility is improved further by the rear-mounted cargo rack, large enough for everything you need for your day.

The BEZIOR X1500 is another fantastic folding bike, but this one is more suited to off-road riding.

To help with this impressive range, the BEZIOR X1500 has a 27-speed Shimano drivetrain using 3 chainrings and a 9-speed cassette. This doesn't just help with efficiency, but it makes riding much more pleasurable, especially during climbs. 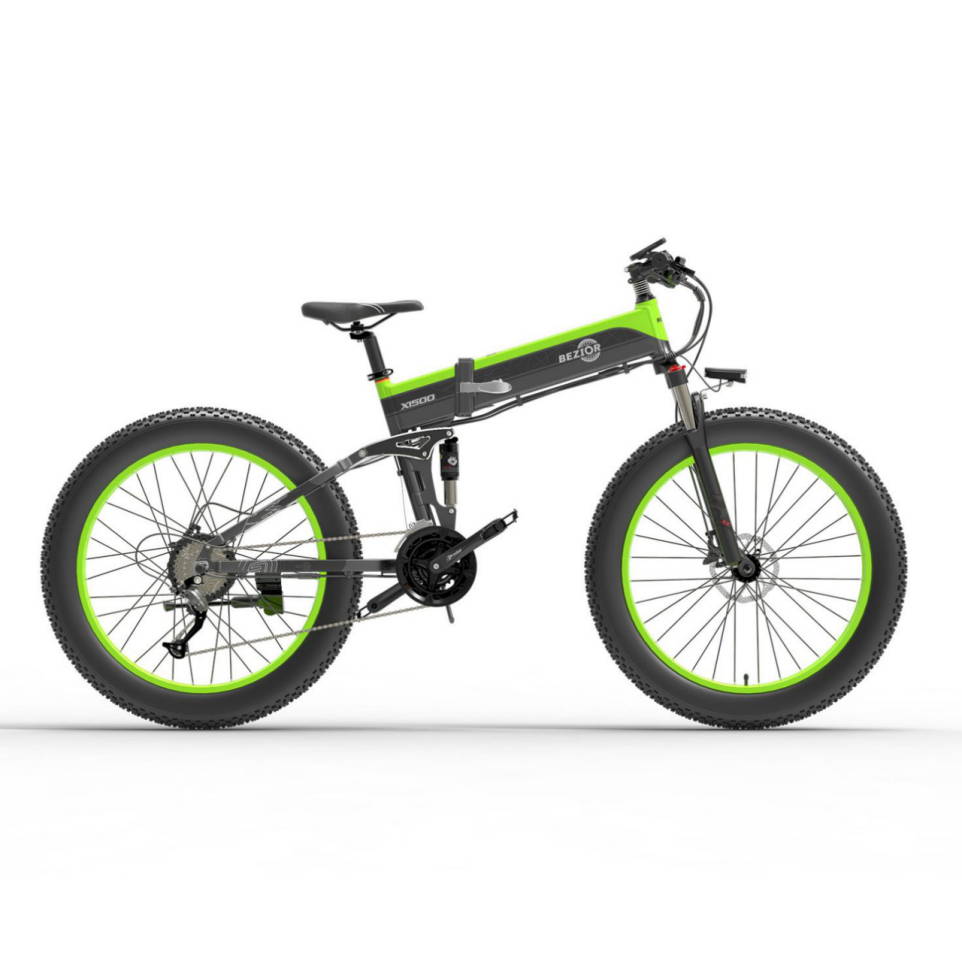 The standout feature of this bike has to be the motor. It has an incredible amount of torque while giving you fast acceleration. This is everything you need for off-road adventures. You can even ride it without pedaling, thanks to the throttle mode.

But you need to be able to control all this power. Therefore, the BEZIOR X1500 has fat tires that provide lots of traction. It also has front and rear suspension to maximize grip and comfort on rugged terrain.

Another critical feature to help you stay in control and safe is the duel piston hydraulic disc brakes. They have an excellent feel and are easy to modulate.

You can take the BEXIOR X1500 anywhere, as it is a folding mountain bike. The compactness, when folded, allows you to carry it in your car to the trails.

The BEZIOR XF200 is a brilliant folding electric mountain bike that performs well while looking cool.

It is fitted with a 1,000W rear hub-mounted motor that accelerates quickly, ideal for effortless climbing on the trails. It has a top speed of 40kph (25mph) and can be ridden without pedaling in the moped mode.

This electric bike is built around a high-quality and lightweight aluminum frame. The frame has a number of features that enhance the bike's capability and versatility. 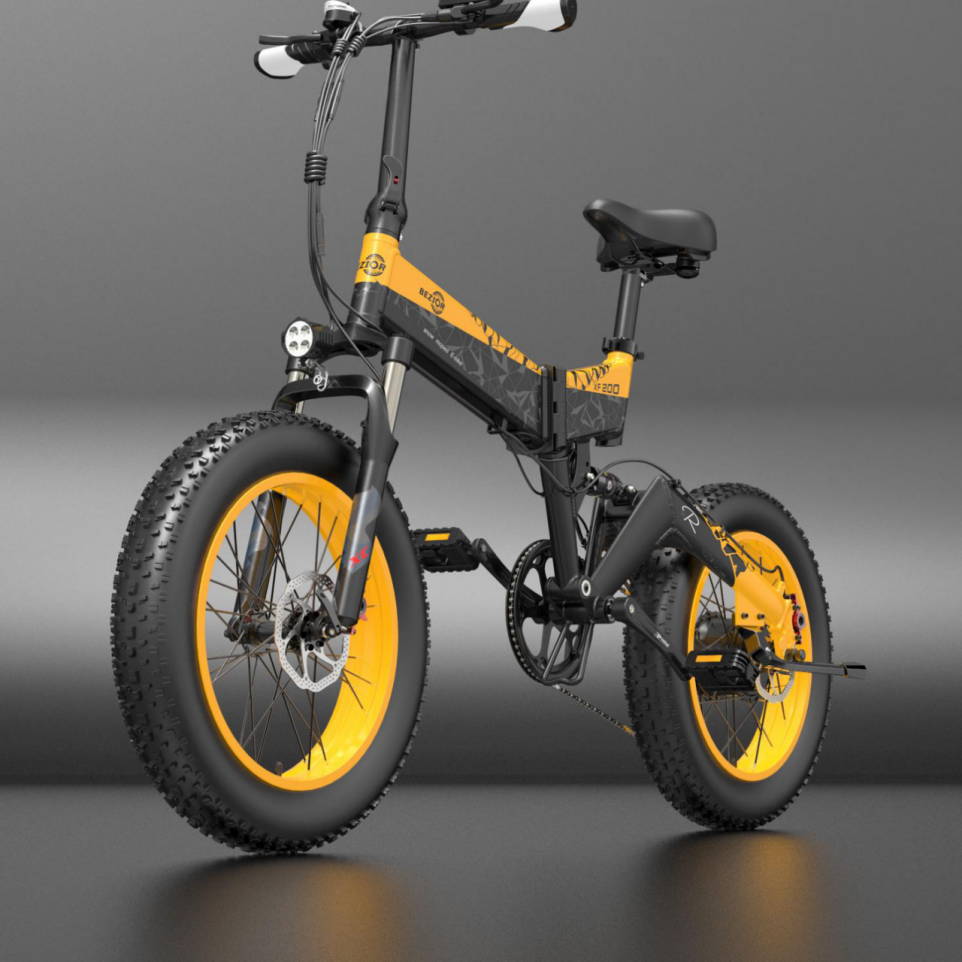 You can fold the bike into a compact size, making storage and transport very easy. Unusually for a folding electric bike, the XF200 is s full suspension bike. This means you get a suspension fork and a rear shock absorber.

The advantage of a full suspension electric bike is that you can ride more technical terrain. But it is also more comfortable, which is essential for a bike with this extended range.

It is vital to control when riding rough terrain; therefore, this bike is equipped with hydraulic disc brakes that provide plenty of stopping power.

To help with the bike's range, the motor is hooked up to a Shimano 7-speed drivetrain with a 52T gear. This also contributes to the XF200's climbing prowess.

The BEZIOR XF001 is a fun moped-stye electric bike with a classic motorcycle design. It is built for casual riding and comfort but could be used for commuting and light off-road riding. 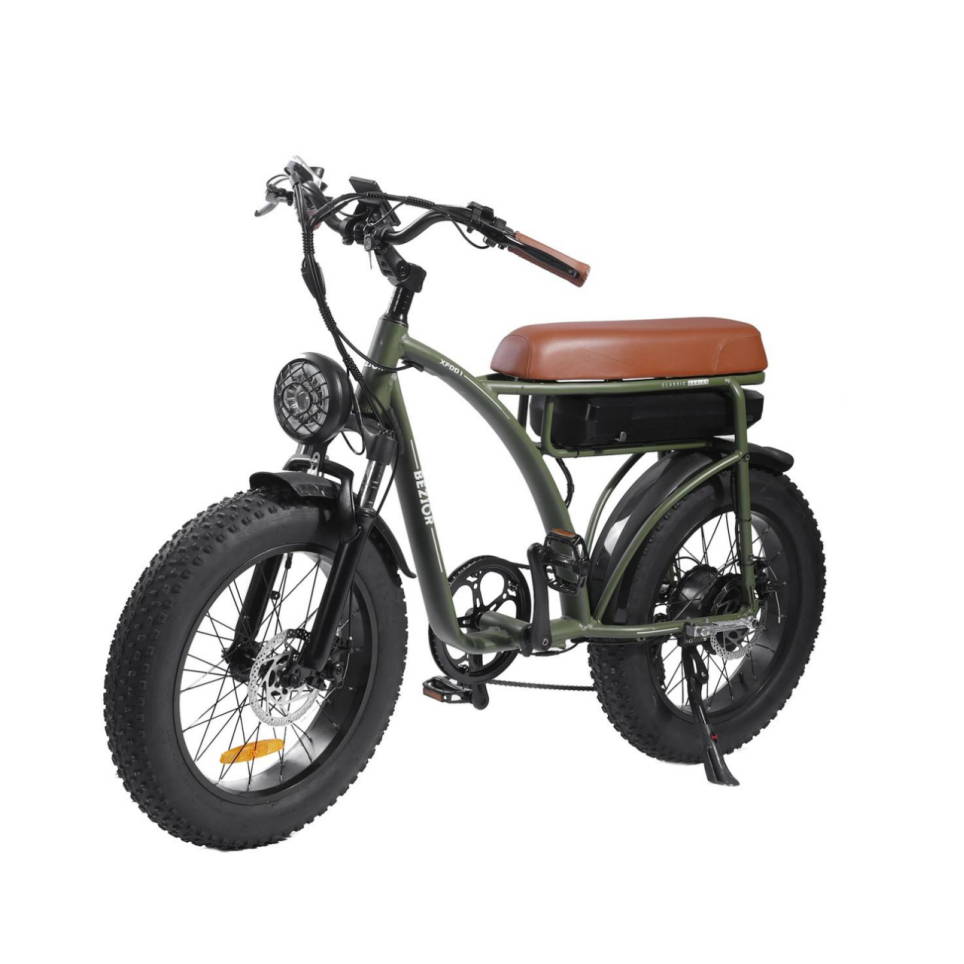 Despite its casual demeanor, the XF001 has a powerful 1,000W motor. This will allow you to arrive at your destination looking as fresh as when you set off. It is even powerful enough to allow you to carry a passenger on the elongated saddle.

This electric bike looks great, thanks to its classic frame design. The vintage motorcycle style is enhanced by the chunky tires that provide lots of traction and contribute to the bike's comfort.

To make the BEZIO XF001 more practical, you can fit it with the optional rear-mounted cargo rack. This item is solid and allows you to carry everything you need for a day out.

The BEZIO XF001 is safe to ride due to the confidence-inspiring tires and the other components. For example, the bike comes with a bright headlight for riding in low-light conditions. But it also has lots of stopping power from the hydraulic disc brakes.

A bike like this requires a high level of comfort. This comes from the squishy tires and suspension fork. But its plush saddle makes riding the XF001 a joy. In addition to this, the mudguards make riding in wet conditions more pleasant.